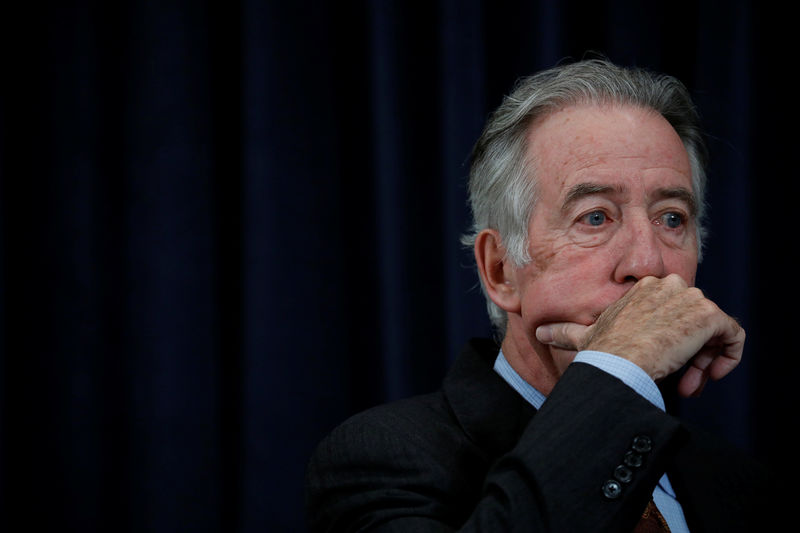 © Reuters. FILE PHOTO: Rep. Richard Neal (D-MA) looks on prior to a House Ways and Means Committee markup of the Republican Tax Reform legislation on Capitol Hill in Washington

House Ways and Means Chairman Richard Neal, a Massachusetts Democrat, and the ranking Republican on the committee, Kevin Brady of Texas, separately told reporters the two sides were exchanging information.

“We’re making substantial progress,” Neal said. “We believe it might take a couple of more exchanges (with the White House), but the thinking is certainly being refined. And we think we’re making headway.”

U.S. Vice President Mike Pence on Tuesday said he believed Congress would pass the agreement this year. House Speaker Nancy Pelosi later said Democrats were aiming to ratify it, but still had concerns about enforcement.

Pence, in an interview to be broadcast on Fox Business Network on Thursday, said congressional passage of the deal largely rested with Pelosi.

“It so much comes down to Speaker Nancy Pelosi, who I believe has been dealing with our administration in good faith on this issue,” he said.

The Trump administration has been pressing for swift approval of the trade deal, but House Democrats are demanding better mechanisms to enforce labor and environmental standards, and to ensure that the deal does not lead to higher drug prices.

Brady said U.S. Trade Representative Robert Lighthizer has offered “some pretty strong steps” to address Democrats’ concerns. However, he added, “there is still more work to do.”

All eight living former secretaries of agriculture – Democrat and Republican – have written to congressional leaders to endorse the trade deal, Brady said.

U.S. House Majority Leader Steny Hoyer told reporters he thought Lighthizer was an “honest broker” and had made steps that he called useful and positive, and U.S. labor leaders were positive about trying to get the agreement approved.

Many progressive Democrats remain concerned, however.

Representative Katie Hill, a newly elected California Democrat, spearheaded a letter to Trump signed by 109 other lawmakers that called for USMCA to include binding climate standards and be paired with a decision for the United States to remain in the Paris climate agreement.

“It is laughable that we are now the only country in the world working to isolate ourselves from the critical and commonsensical principles of the Paris Agreement,” they wrote.

“We need to stand with our neighbors in Canada and Mexico as members of the Paris Agreement, and we need a North American trade deal that reinforces – not undermines – that agreement.”