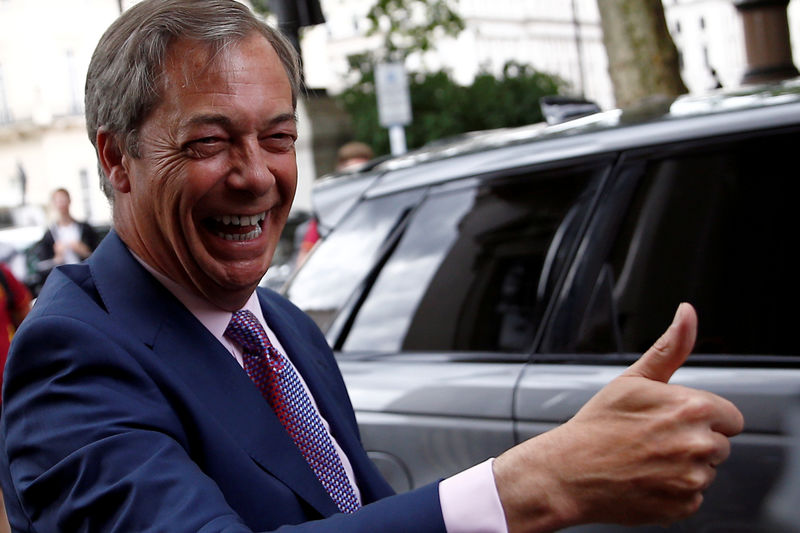 LONDON (Reuters) – U.S. President Donald Trump said Britain should refuse to pay its 39 billion pound EU divorce bill and “walk away” from Brexit talks if Brussels does not give the UK what it wants.

In an interview with the Sunday Times newspaper ahead of his state visit to Britain starting Monday, Trump said the next British leader should send arch-Brexiteer Nigel Farage to conduct talks with the EU.

Trump said Britain must leave the EU this year.

“If they don’t get what they want, I would walk away. If you don’t get a fair deal, you walk away.”

Trump repeated his backing for those candidates to succeed Prime Minister Theresa May who have said Britain must leave on the due date of Oct. 31 with or without a deal.

Those candidates include former foreign secretary Boris Johnson, whom Trump praised in an interview with the Sun newspaper on Friday, along with former Brexit minister Dominic Raab and interior minister Sajid Javid.

Trump also said it was a mistake for the Conservatives not to involve Farage, the Brexit Party leader, in negotiations with Brussels after his success in European Parliament elections last month.

“I like Nigel a lot. He has a lot to offer – he is a very smart person,” Trump said. “They won’t bring him in but think how well they would do if they did. They just haven’t figured that out yet.”

On the Brexit divorce bill, Trump said: “If I were them, I wouldn’t pay 50 billion dollars. That is a tremendous number.”

Trump also said he would have “to know” veteran Socialist Labour opposition leader Jeremy Corbyn before authorizing U.S. intelligence to share its most sensitive secrets with a hard-left government.