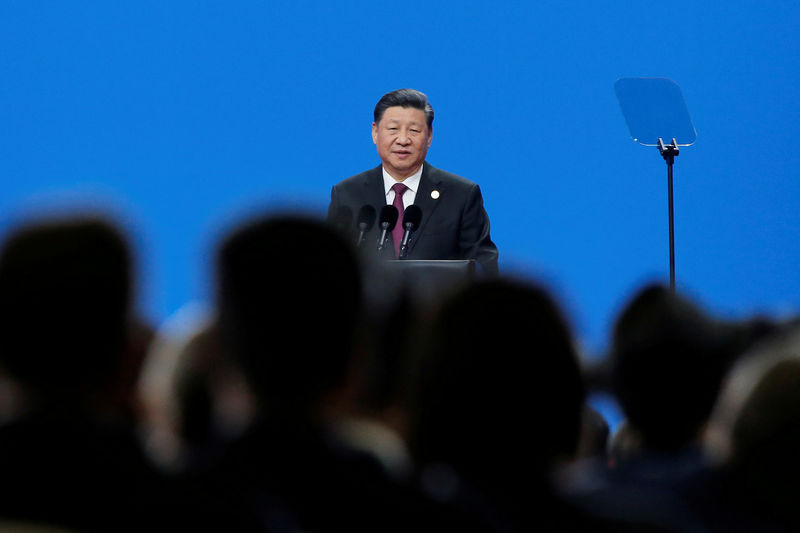 By Michael Martina and David Lawder

BEIJING/WASHINGTON (Reuters) – China must prepare for difficult times as the international situation is increasingly complex, President Xi Jinping said in comments carried by state media on Wednesday, as the U.S.-China trade war took a mounting toll on tech giant Huawei.

The world’s two largest economies have escalated tariff increases on each other’s imports after talks broke down to resolve their dispute, and the acrimony has intensified since Washington last week blacklisted Chinese telecom equipment company Huawei Technologies Co Ltd.

The listing, which curbs Huawei’s access to U.S.-made components, is a potentially devastating blow for the company that has rattled technology supply chains and investors, and saw several mobile carriers on Wednesday delay the launch of new Huawei smartphone handsets.

During a three-day trip this week to the southern province of Jiangxi, a cradle of China’s Communist revolution, Xi urged people to learn the lessons of the hardships of the past.

“Today, on the new Long March, we must overcome various major risks and challenges from home and abroad,” state news agency Xinhua paraphrased Xi as saying, referring to the 1934-36 trek of Communist Party members fleeing a civil war to a remote rural base, from where they re-grouped and eventually took power in 1949.

“Our country is still in a period of important strategic opportunities for development, but the international situation is increasingly complicated,” he said.

“We must be conscious of the long-term and complex nature of various unfavorable factors at home and abroad, and appropriately prepare for various difficult situations.”

The report did not elaborate on those difficulties, and did not directly mention the trade war or of the United States.

No further trade talks between top Chinese and U.S. negotiators have been scheduled since the last round ended on May 10, the same day President Donald Trump increased tariffs on $200 billion worth of Chinese goods and took steps to levy duties on all remaining Chinese imports.

Negotiations between the United States and China have stalled since early May, when Chinese officials sought major changes to the text of a proposed deal that the Trump administration says had been largely agreed.

However, Chinese Ambassador to the United States Cui Tiankai, speaking to the Fox News Channel, said on Tuesday that Beijing was still open for talks.

Repercussions of the blacklisting mounted for Huawei, with some mobile operators, including the Ymobile unit of Japan’s Softbank Corp and rival KDDI Corp putting launch plans for Huawei’s new P30 Lite smartphone on hold.

While China has not said whether or how it may retaliate to the measures against Huawei, state media have taken an increasingly strident and nationalistic tone.

U.S. firms said in a survey released on Wednesday they were facing retaliation in China over the trade war. The American Chamber of Commerce of China and its sister body in Shanghai, said members reported that they faced increased obstacles such as government inspections, slower customs clearances and slower approval for licensing and other applications.

It also said that 40.7% of respondents were considering or had relocated manufacturing facilities outside China. Of the almost 250 respondents to the survey, which was conducted after China and the United States both raised tariffs on each other’s imports this month, almost three-quarters said the impact of tariffs was hurting their competitiveness.

Long considered a solid cornerstone in a relationship fraught with geopolitical frictions, the U.S. business community has in recent years advocated a harder line on what it sees as discriminatory Chinese trade policies.

The United States is seeking sweeping changes to trade and economic policies, including an end to forced technology transfers and theft of U.S. trade secrets. Washington also wants curbs on subsidies for Chinese state-owned enterprises and increased access for U.S. firms in Chinese markets.

China for years has blocked major U.S. tech firms, including Google (NASDAQ:) and Facebook (NASDAQ:), from fully operating in its market. Those and other restrictions have fueled calls from within the U.S. business community for Washington to pursue more reciprocal policies.

Cui told Fox News Channel that U.S. restrictions on Huawei “are without any foundation and evidence” and could undermine the normal functioning of markets.

“Everybody knows Huawei is a privately owned company. It is just a normal Chinese private company,” Cui said. “So all the action taken against Huawei are politically motivated.”