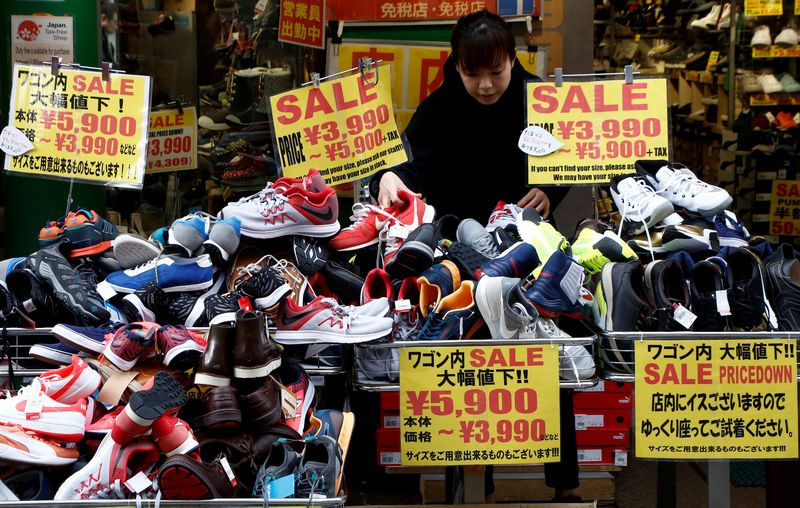 © Reuters. FILE PHOTO: A clerk arranges shoes at a shop in Tokyo

TOKYO (Reuters) – Japan’s core consumer prices rose 0.9 % in April from a year earlier, accelerating slightly from the previous month but remaining distant from the central bank’s 2% target, underscoring the challenges it faces in ending deflation.

The data adds to worries for policymakers concerned about the damage escalating U.S.-China trade tensions could have on the export-reliant economy.

The so-called core-core CPI, which strips away the effects of volatile food and energy costs and is the main policy focus for the central bank, rose 0.6% in April, government data showed on Friday. It was the biggest increase since June 2016.

Japan’s economy grew at an annualized 2.1% in the first quarter, defying forecasts for a contraction due to net contributions from exports.

But the expansion was overshadowed by weaknesses in capital expenditure and private consumption, casting doubt over the BOJ’s argument that robust domestic demand will moderate the pain from slowing global demand.

Weak consumption would hamper the BOJ’s attempts to boost inflation as companies would be discouraged from raising prices for fear of scaring away cost-sensitive shoppers.

Years of heavy money printing have failed to drive up inflation to the BOJ’s elusive 2% target, forcing the central bank to sustain a massive stimulus despite the damage ultra-low interest rates is inflicting on financial institutions’ profits.

Fed in No Hurry to Move from Sidelines, Minutes Show By Investing.com

U.K. Inflation Accelerates to Its Fastest Pace in Six Months By Bloomberg