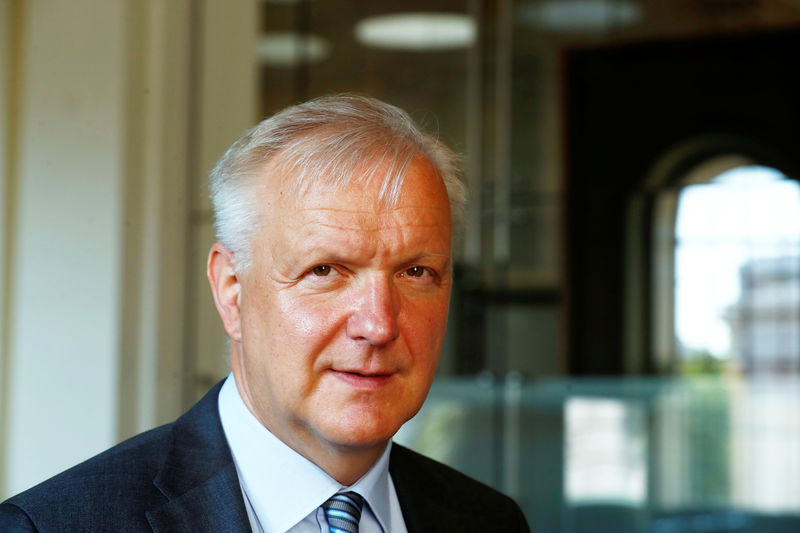 HELSINKI (Reuters) – European Central Bank presidential hopeful Olli Rehn spelled out the challenges facing Mario Draghi’s successor in an interview published on Saturday, but declined to comment on the process.

The ECB rate setter and Bank of Finland chief has been tipped as a potential successor to Draghi when the ECB president leaves on Oct. 31, but the process is steeped in secrecy.

“I trust that EU decision makers will find a person for the job who will be able to manage it even through tight spots which will also come,” Rehn was quoted as saying by Finland’s Helsingin Sanomat newspaper.

Replacing Draghi, who famously pledged in 2012 to do “whatever it takes” to save the euro, has left markets anxiously awaiting news of his successor.

“The governor has to be both qualified in monetary and financial policy as well as capable of team play,” Rehn said, while declining to comment on the deliberations.

Rehn’s previous posts include Finnish minister for economic affairs as well as a decade working as a European commissioner overseeing the bloc’s enlargement as well as economic policy.

In March, a Reuters poll of economists found that while French ECB board member Benoit Coeure was considered best-suited for the top job, the most likely compromise candidate was Rehn’s compatriot Erkki Liikanen, a former Finnish central bank chief.

When asked who was the most likely to win, well over a third named Liikanen, with the remainder almost equally split between Coeure, Rehn, French central bank chief Francois Villeroy de Galhau and Bundesbank chief Jens Weidmann.

In the newspaper interview, Rehn paraphrased former England soccer player Gary Lineker’s line that, in the end, the Germans always win, although no German has so far held the top ECB job.

“It’s good to remember that even Germany can be beaten. You can ask Antonin Panenka about it,” Rehn added, referring to the former Czech footballer who scored the winning goal against West Germany in the 1976 final of soccer’s European Championships.

The goal? A softly chipped penalty in the middle of the net as the goalkeeper dived to one side.

General Motors’ Dhivya Suryadevara steps down as CFO By Reuters