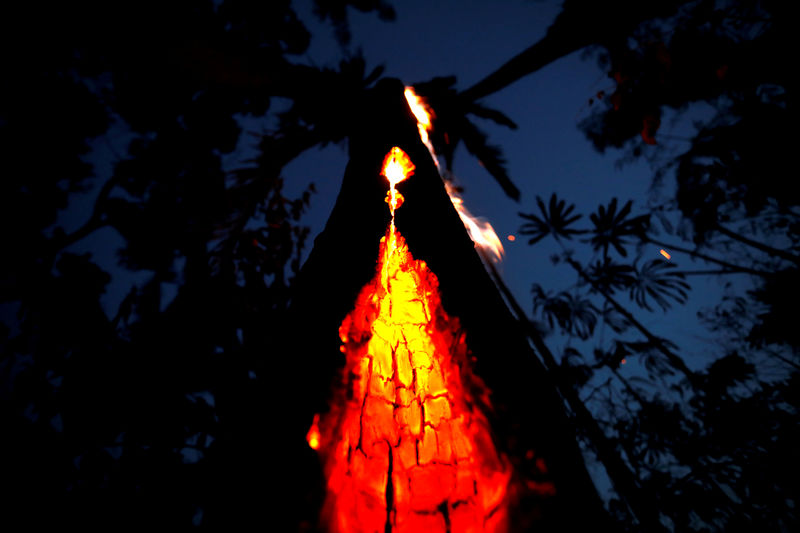 RIO DE JANEIRO (Reuters) – With widespread fires wreaking havoc on the Amazon (NASDAQ:), over 200 investors representing some $16.2 trillion under management on Wednesday called on companies to do their part in halting the destruction of the world’s largest tropical rainforest.

Nongovernment organization Ceres said in a statement that 230 funds have signed a declaration calling on firms to keep a close tab on supply chains, among other measures to curtail forest destruction.

“Deforestation and loss of biodiversity are not only environmental problems. There are significant negative economic effects associated with these issues and they represent a risk that we as investors cannot ignore,” said Jan Erik Saugestad, CEO of Storebrand Asset Management, Norway’s largest private asset management firm and one of the signatories.

The resolution did not explicitly say signatories were threatening to withdraw investments from any companies. Still, it added to the pressure that international corporations and investors have put on partners operating in the Amazon, the world’s largest tropical rainforest that lies in Brazil, Bolivia and seven other countries.

In Brazil alone, more 2,400 square miles of the Amazon have been deforested this year, an area larger than the U.S. state of Delaware.

Meanwhile, 60,472 fires have been recorded year-to-date in the Amazon, up 47% from last year, according to government data. Many fires have been set intentionally by farmers and ranchers, and the response of the government of Brazil’s right-wing president, Jair Bolsonaro, has been criticized as indifferent.

In neighboring Bolivia, President Evo Morales has come under scrutiny for his ambitions to make the country a global food supplier, calling agricultural commodities the “new gold” that will help diversify the economy.

The resolution called on companies to implement a “no deforestation policy” with “quantifiable, time-bound commitments,” assess and disclose the risks their supply chains pose to forests, establish a monitoring system for supply chain partners and report annually on “deforestation risk exposure and management.”

“There is an urgent need to focus more on effective management of agricultural supply chains,” Jan Erik Saugestad, CEO of Storebrand Asset Management, was quoted as saying in a statement released by Ceres.

In August, VF Corp (N:) – owner of apparel brands such as The North Face and Vans – said it would stop purchasing leather from the Amazon in response to the fires.

Separately, investors managing $15 trillion in assets turned up the heat on oil and gas sector ahead of a United Nations summit in New York aimed at accelerating efforts to fight climate change.

Asia shares look to China for recovery lead, earnings in focus By Reuters